As the 21st century lurches ever onward, more and more districts are formalizing a core set of cross-grade-level skills to provide a “north star” for assessing student growth and guiding “the adults” in the redesign of the student experience, including the curriculum and assessment systems that support it.

These skills frameworks typically go beyond the, narrowly, defined outcomes schools have traditionally expected of graduates — academic excellence as measured through grades, transcript credits, and test scores — and extend the definition of success to include evidence of authentic and world-connected learning, social and emotional fitness, and career and life preparedness. Competencies like critical thinking, creative thinking, communication, and collaboration find greater purpose in the world at large and students who have not had quality opportunities to learn and reflect on these “in the sandbox” of schooling are more likely to graduate ill-prepared to find health and success in their careers, civic life, families and communities.

There are a handful of high quality, practitioner developed, holistic success skills frameworks out there that provide inspiration for districts to build and customize their own graduate profile.

There are, of course, other frameworks beyond those named here and while structure and nuance of mission may differ, they all share a common goal: advancing equity in education, promoting students’ self-efficacy, and re-defining academic success to include those skills that most impact students’ life chances beyond graduation.

Districts can spend years shaping their graduate profile and years beyond iterating on their plan, including systems redesign for curriculum, professional learning, and student assessment. Once they have a profile in place, however, districts typically find themselves asking “How does our graduate profile directly impact the student experience?” 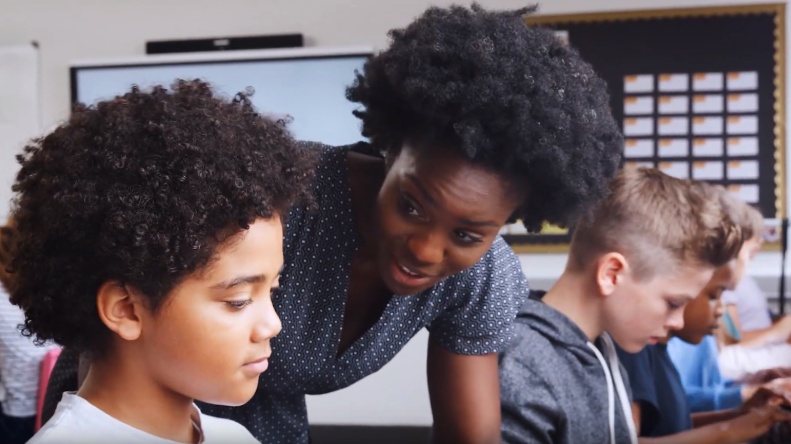 How do districts execute on the graduate profile strategy?

Many districts’ first desire in operationalizing their graduate profile is to have students curate and reflect on learning artifacts. This can be accomplished through analog or digital portfolios, starting with the tools they know — be it Google Drive, Sites, or paper-based organizational systems — to house student work and create opportunities for students to demonstrate growth along the district’s competencies.

For some, these DIY approaches work well. For others, a more robust, centralized mode of curation and organization is needed. Some districts turn to their Learning Management System to add a graduate profile framework within the existing LMS structure. Others implement standalone portfolio management systems for students and teachers to collect and reflect on their best work. Often it is a challenge to find platform solutions that offer a custom-fit to meet the district’s approach.

A hybrid, customizable version of the first and last example, Backpack for Google Drive, built with the close guidance of partner school districts, is a portfolio management system built on top of Google Drive and Classroom, utilizing a school/districts’ existing tech. It functions as close as possible to students’ and teachers’ existing workflow to quickly mobilize students and teachers in artifact curation and reflection.

The competency-based learning policy and advocacy institute KnowledgeWorks has identified “district-level control over system vision, curriculum and instruction, as well as formative assessment and student supports” as a key ingredient to scaling personalized learning. Because every district has a unique approach to their graduate profile, Backpack for Drive was built to support a range of configuration options to ensure the platform fits the locally defined priorities and systems choices.

The platform name, landing page, and logo can be customized.

The names, icons, colors, and descriptors of competencies are fully customizable. Descriptors can be varied by user group to permit different languages for teachers and students or for students at different age levels. 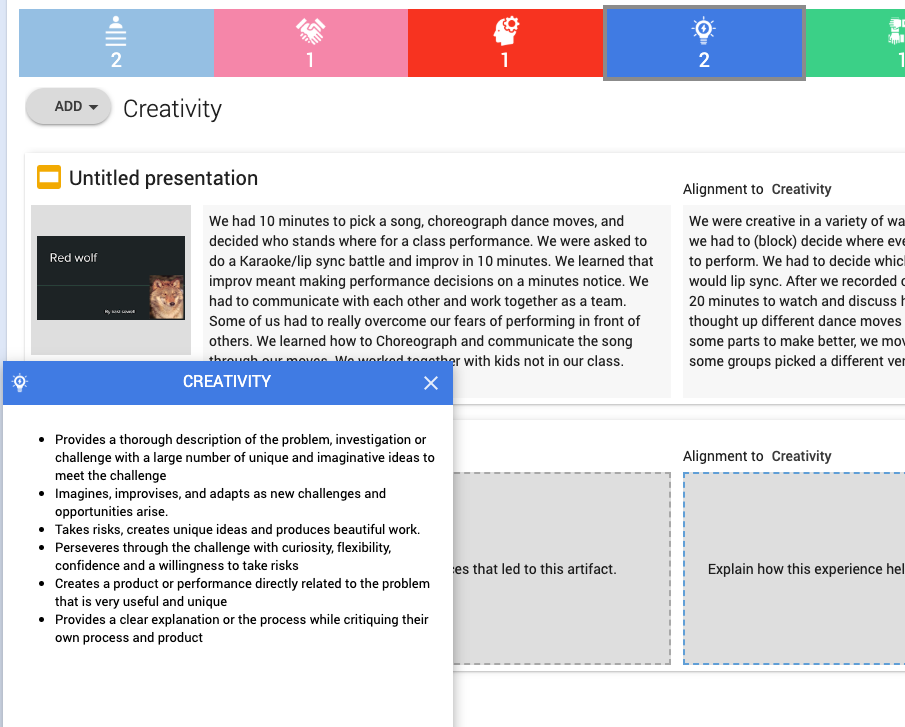 Above: Skill names, descriptors, colors, and icons are defined and custom configured for each school district.

For ease of navigation and habituation, the Backpack app URL can be either a subdomain of the district’s primary domain or a domain provided to the district. In addition to the already-highlighted Google Workspace “waffle” icon, the app can also be distributed as a pushed bookmark with branded favicon on Chrome. 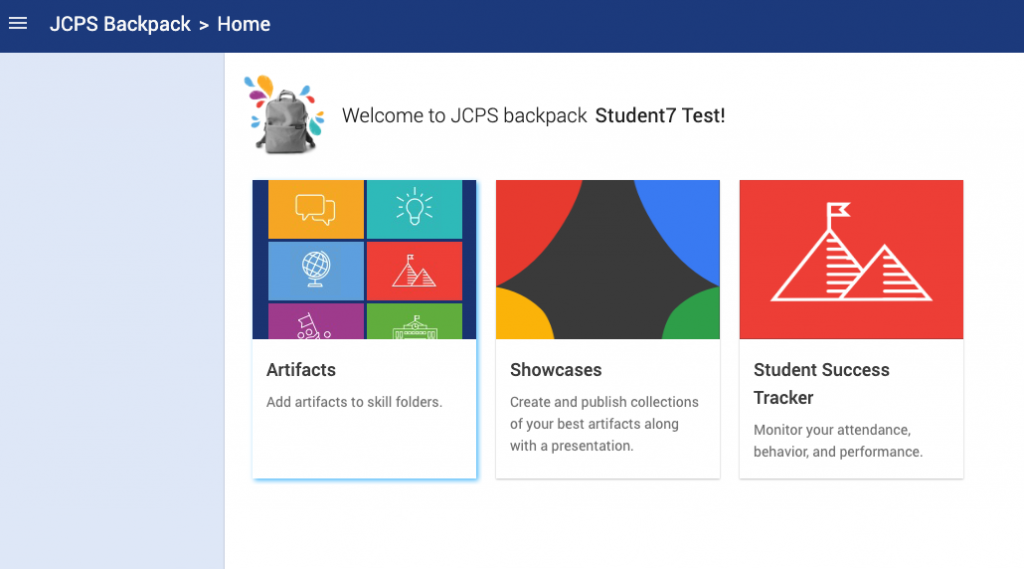 Above: Student home page tiles customized to include a “Student Success Tracker” link to a 3rd party data dashboard. 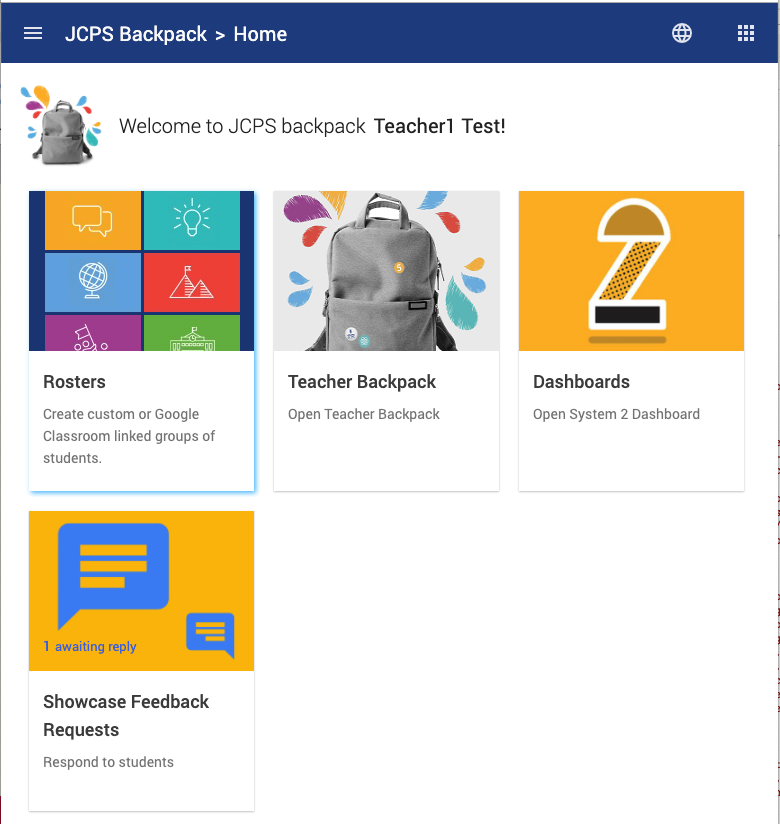 Above: Custom home page tiles on the teacher home page. The “Teacher Backpack” tile links to a Google Site created by the district to offer supports to teachers adapting their instruction to create more opportunities for students to demonstrate growth in the district’s success skills. The “Dashboards” tile is a link to a 3rd party student risk tracking platform.

The Backpack app includes its own app navigation waffle that includes most Google Workspace apps by default, but can be extended to include additional quick links. 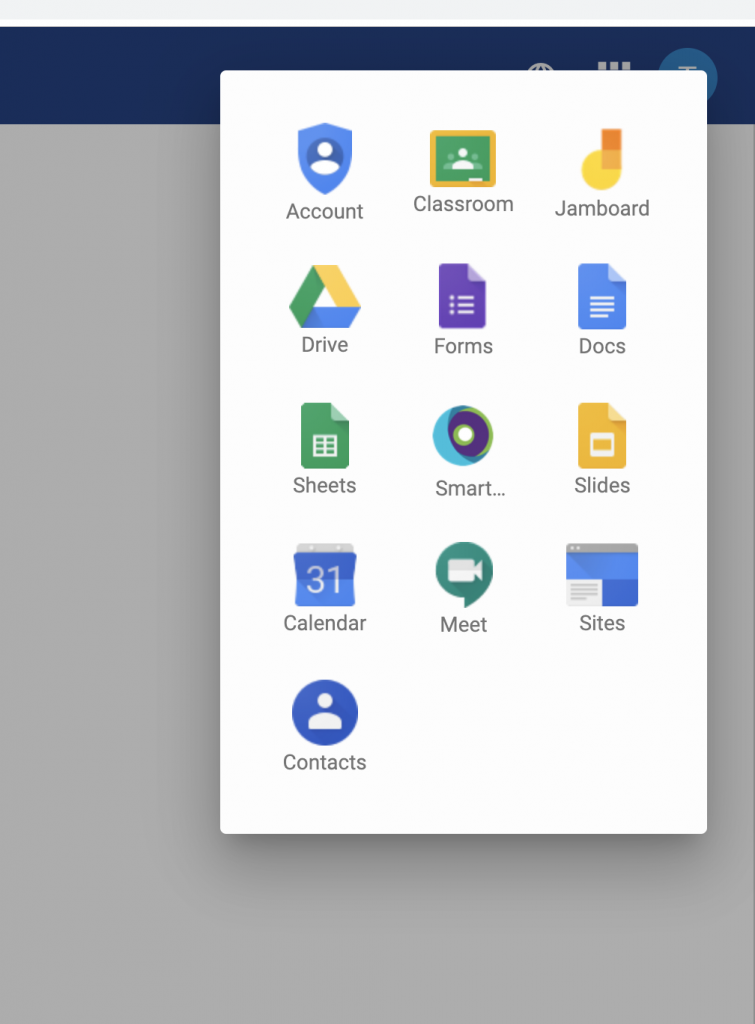 Above: In app waffle that includes a district-defined link to the “Smart Learning Suite”

As you can see from the districts above, Backpack for Google Drive creates a system that customizes to support a district’s existing branding, technology and data systems footprint, and initiative naming. With its seamless integration to Google Drive and Classroom, the teacher and student training burden is lessened and the road to adoption, shortened.

We think Backpack for Google Drive is a good fit for any district using Google Workspace for Education, and we invite you to chat with us to see if it’s right for yours.