So you’ve made it to this blog post. That means you’re either confused, fed up or interested in what’s been happening regarding Google Workspace apps. Or was it the super unique and clever title that no one else in the blogosphere has ever used? Either way, this post will provide clarity on the different types of apps, a run down of notable app changes and the direction we see app management within Google Workspace heading.

The most common question we’ve been getting recently about Apps is: What are the differences between each App type?

Chrome apps work similarly to a regular program on your computer but they’re run within the Chrome browser. They are typically downloaded from the Chrome web store or pushed out via the Admin console. In my opinion, this is where the app confusion began. Years ago, when Chrome apps were introduced, we all knew “apps” to be and act like phone apps. When in reality the majority of Chrome apps are shortcuts to websites. For schools, Chrome apps that are the most important are testing apps that run as kiosk apps.

Examples of a Chrome app are: WeVideo Editor, Chrome Sign Builder and TestNav.

Examples of a Chrome extension are: Grammarly and the now deprecated, Google Workspace training.

For those Android phone users, Android apps on Chromebooks will be a familiar experience and interface. Almost too familiar. For those of you who have explored Android apps on Chromebooks, you may have noticed some will have the shape and interface of a phone and may not have the best user experience. One reason for this is developers have not optimized their app to act and look polished on Chrome OS (it’s getting better every day though. They’ll get there). It’s important to note that not all Chromebooks support Android apps out of the box, but since 2018 all new devices do. When it comes to Android apps, think this: Apps on your Android phone or tablet now work on Chromebooks. Android apps will become increasingly common and is a main option going forward as Chrome apps are phased out (more on this later). Android apps can be more robust and a better, more rich experience compared to Chrome apps and extensions. Note: to configure options regarding permission changes and notifications, go to play.google.com/work. These options are not presented within the new apps & extensions page.

PWAs use modern web APIs to create Web apps that work cross-platform. To oversimplify: it’s a web page that looks and acts like a native app. This type of app will probably be the newest to users. PWAs have the option to use a service worker which will make a bridge between the local machine and the website. This is used for syncing data and notifications without the need to have the Web page opened.

Examples of progressive web apps are: PWA Example and Pinterest (click on the circle+ icon in the taskbar).

Marketplace apps are currently managed in a different area of the Admin console than the other apps mentioned above. Similar to the Chrome web store, it’s an online store for Google and third party app software. Marketplace Apps can be pushed out from the Admin console or installed by users (depending on marketplace configuration). The majority of marketplace apps will show up in the apps launcher (waffle iron icon). One major difference with marketplace apps is that they will appear in any browser a user signs into, whereas Android apps and Chrome apps and extensions will only appear in the Chrome Browser or Chrome OS.

Now that we’ve got a handle on the types of apps let’s regroup on a few notable app changes. Although these changes are a few months old, we know it’s tough to keep up with them all – so let’s dive in!

Drive add-ons move into marketplace apps — I want to take a moment and discuss a change that happened last fall but we continue to see schools have issues because of it. It’s the Drive add-ons move into the marketplace. It’s a simple enough announcement but schools aren’t aware that this change is why their users are having issues, especially when it “used to work fine” or “this user doesn’t have the problem, but this one does.”

So, what happened? Google Drive add-ons moved into the marketplace section of the Admin console. The problem is that most domains allowed Drive add-ons for all because it was the default. You may not have even known you could change this. Schools are more aware of the marketplace settings, and more domains have changed that setting.

Users may receive an error message when trying to install a Drive add-on if your domain add-on setting was set to “allow all” and the marketplace setting is configured as “do not allow users to install any application from Google Workspace marketplace” or a whitelist is set up and that app has not been whitelisted.

Since our Amplified IT Labs products are add-ons, our team deals with this quite a bit. They have created a tutorial specifically for Gopher for Chrome but the process would be the same for other add-ons.

A few important notes and limitations regarding the move of add-ons into marketplace apps. First, when you whitelist an add-on you are whitelisting it for the entire domain. Second, it’s important to know that the main marketplace setting is global. This means you’re not able to allow marketplace apps for staff vs students. While the recommended setting needs to be decided by your school’s IT and instructional departments, choosing the whitelist setting option is most common.

Another common question we get is, “Is there  a way to remove previously added marketplace apps or add-ons as an administrator?” The answer is unfortunately, no, there is no way to do this.
An interesting finding our team has discovered is that if you block marketplace apps or configure it to whitelisted only and you force a marketplace app to an OU (without whitelisting the app), it will still install and work. I would keep an eye on this configuration if you take this approach, as I’ve seen inconsistencies in a similar “work around” in Chrome apps and extensions.

Details on major changes to Chrome management in the Admin console

Chrome apps are going away — A few weeks ago Google announced that Chrome apps will be phasing out. Your first thought may be, “Wait a minute – what about testing on Chromebooks?” Don’t panic.

Google is working with all developers to move apps to be progressive web apps (PWAs), Android apps, or Chrome extensions by the deadline (hey, we talked about those earlier!). These developers have already started working with Google to make a transition plan and have their code moved before the deadline in 2 and a half years. This also gives Google time to provide additional controls and settings within the Admin console for the new format of kiosk apps. While this is an initial shock, there is more than enough time for companies to move their code and they have the full support of Google to do so.

Starting in March 2020 no new Chrome apps will be added to the Chrome web store. All existing apps can be updated though, so there is no immediate concern. In June of 2020 support for Chrome apps on Mac, Windows and Linux will stop. In most cases, many users have already moved away from Chrome apps on those OS’s already, but it is something to watch out for. In June 2022, however, Chrome apps will no longer be supported on any device, including Chrome devices.

What does this mean for you? It’s an “FYI” for now but I would strongly recommend beginning to explore Android apps and PWAs on your devices in the coming year.

Taking a closer look at the apps & extensions page — In our November blog post, Stephen Gale talked about the changes within the Chrome management user settings. Including the new interface, combining Android and Chrome app management and new navigation to additional settings. If you haven’t already, read up on those changes here.

I’d like to give the new apps & extensions page a closer look and talk about an exciting new way to push out “apps” to users. Besides having a more unified spot to manage apps, did you notice the “add by URL”? 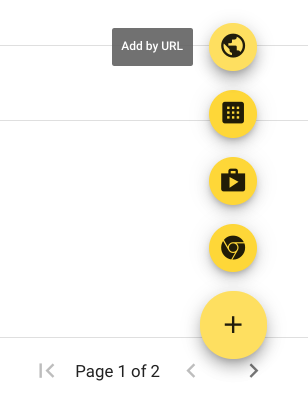 You can push out a URL and have it open in a new tab or a new window (a new window+pinning will make it seem like an app on the bottom of your shelf). For example, you can push out the new Hangout Chat URL. I personally like doing this rather than downloading and using the Hangouts Chat Android app because the Android app, in my opinion, is not optimized the best on Chrome OS. 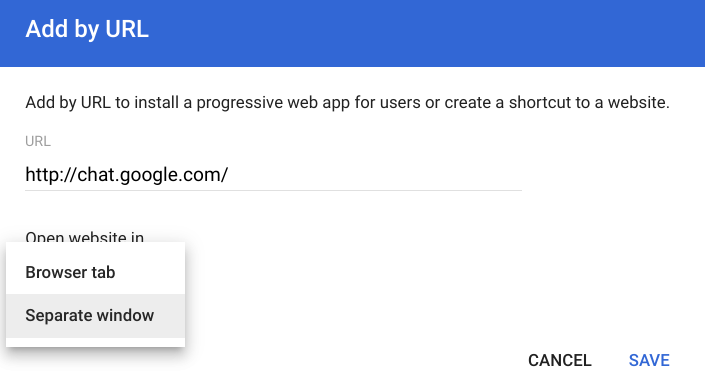 Another change that could cause frustration is you now add to the recommended web store by going to the apps & extensions page > click on a Chrome App > toggle to “Include in Chrome web store collection” on the right-hand sidebar. Remember, you will only see the Chrome Web Store if you have a Chrome web app highlighted. You’ll know it’s a Chrome app if the icon of Chrome is shown.

If you want to be in the know, join us in our North American Google Technical Collaborative and join the conversation!