Over the past several months, school IT Administrators have had to do a lot of thinking on their feet. Nearly overnight in some cases, dependency on technological resources became exponentially important as cities and states went into lockdown, and schools were put into remote learning situations. Technology departments went into overdrive to get their virtual environments ready for using Google Classroom and with Google Meet (Hangouts Meet at the time) to connect teachers and students in a remote classroom environment.

There aren’t very many settings within Google Meet, so from a technical standpoint the “setup” was pretty straightforward:

Additionally, for schools wanting to officially support Google Meet over any other platforms, Chrome User settings can be configured to not request page-level permissions for voice and video access, and block any other video access. 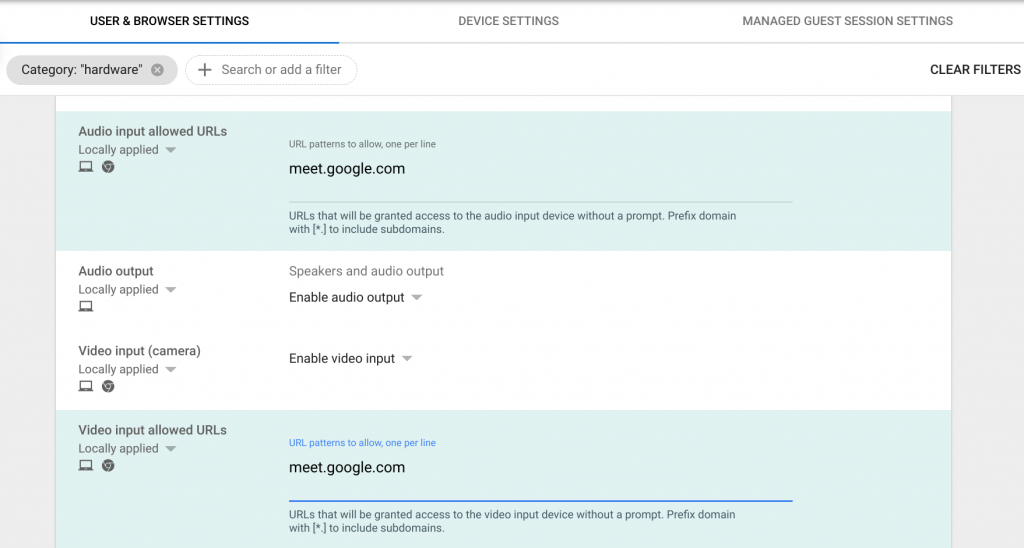 But with only these settings, questions started being asked. “What happens when a student goes to a room from last week’s class?”,  “How do we see what meeting rooms users have been in”, “Is there a way to track attendance or participation?”, “What about meetings that were started outside our organization? Can we limit students from joining external meetings?”

With these questions coming in from not only schools but concerned parents, Google has done some pivoting of its own to help resolve the unforeseen issues that having students and staff on the same meeting platform had created.

The first improvements came in March 2020, with some minimal moderation settings – restricting who can mute or remove participants, along with a restriction on rejoining meetings which had been given “nicknames.” This was quickly followed by the addition of a link in Google Classroom that was essentially a nickname for that class’s Google Meets.

Without experiencing the use of nicknamed meetings firsthand, it may be difficult to understand just what is happening with these nicknamed meetings. It’s apparent that they’re important since this is the primary mechanism to restrict students from joining past meetings. But what isn’t 100% clear from the reading is how they work.

When a teacher (or anyone else who can create a meeting room) goes to a room with a nickname, a lookup is performed. If the meeting room exists within the domain for that nickname, the user is redirected to that room. If the nickname does not have an associated nickname, then a room is created for others to join. When someone that is not permitted to create a meeting room they are told that they are not allowed to create rooms and to contact their administrator. They might think they weren’t trying to make a room, but that is the default behavior when there is not an associated meeting room linked to a nickname.

After the meeting has ended and the last participant has left the room, Google closes that meeting room forever. There is a period between 2 and 5 minutes that has been delegated as a “grace period” for the occasional network disruption where users can rejoin the room. Once the grace period has passed and no one has rejoined, not even the organizer can re-enter the room with the same ID. Next time that the nickname is used by a teacher (or any other user which is permitted to create a room), a new room with a new 10 digit ID will be created.

Once a meeting room has been created, anyone who enters the same nickname will be redirected to that meeting room. This can cause some collisions or misunderstandings, such as if a teacher created a room with a nickname of “third-period” anyone who entered the nickname “third-period” would be permitted into the room, even if they weren’t in the teacher’s class. This was the primary reason which the unique nickname was added into the Google Classroom interface.

If teachers are wanting to make it easy to remember nicknames for their students, instruct them on making unique names. Include the teacher’s name and the course or period. Oftentimes this will be unique enough. But there will be times when additional data will be needed to differentiate between two teachers with the same last name or different math groups. Prepare teachers for the eventuality of a collision and help them know how to best handle it. The current nature of Google Meet is that anyone in the domain with the link is implicitly permitted to join a meeting room.

More controls on the way

In an August blog post, Google provided some additional timelines with insights into what they’ve been working on for further controls within Google Meet. Many of the awaited features, such as breakout rooms were also announced as a coming part of the Education Plus package. Some of the additional controls which were being made available for all versions of Google Workspace for Education are:

These additional moderation features are scheduled to roll out throughout the month of September.

There will be times when something is not “working as expected.” A student can mute or remove a teacher or other students. The video recording is owned by a secretary instead of the superintendent. Students cannot join the meeting that they were able to join last week.

The first thing to establish is what is the Meeting ID of the meeting in question. Knowing the nickname of the meeting doesn’t help at all, since there is no way to look up a meeting by nickname once the meeting has ended. Enter the Meet Quality Tool.

This tool offers three views – a meeting view, a person view, and a Google Meet device view.  You get to the tool through the Admin console by going to Apps > Google Workspace > Meet > Meet quality tool. The Google Meet device view is for managed Google Meet hardware, so this is not going to be used in organizations that don’t have these room-based devices. The other views, however, offer quite a lot of information about meetings which your users have participated in.

Within the Meet quality tool, you can find the IDs of meetings, links to recordings, a list of participants and actions taken (like muting or presenting screen), CPU and network usage, packets dropped, all in a dashboard-style for each meeting. Information found in this tool can be used to determine if the issue was due to a local network issue or device issue, or if it was because an unexpected user was made the organizer of the meeting instead of the expected teacher.

If a teacher has said that they don’t know the Meeting ID, but they can tell you when the meeting was, using the participant view, you can locate the meeting room in which they were in. If they claim to be the organizer of a meeting (or in the case of meetings with nicknames or rooms from Google Classroom links, the first person to click the link that is able to create rooms) you can validate that they are the actual organizer.

If you want to verify that the meeting was created using a nickname, and as a result should not be accessible to users after the meeting has been marked as ended, attempting to rejoin the meeting with the given ID should result in an error.

If you are able to rejoin with the meeting code in the URL, the room is re-joinable by any user on the domain as well as any other invited user. So if an administrator doing an investigation navigates to a room associated with a meeting code and they don’t get a blocked notification, the room was not created with a nickname.

Once the meeting ID has been established, along with the organizer, and things still are unexplained or unexpected, this is the point where involving Google Support and reporting the issue directly to Google would be recommended. The previous information such as the meeting ID, Organizer, organizer’s organizational unit, and meet creation setting for that user will help Google Support determine if the issue is something that needs to be addressed by the engineering team.

So from the original list of “what about” questions from the initial setup, many have gotten answers. But rather than it being a setting within the Admin console or something which is configured by the IT department, it falls on the end users, the teachers, and school administrators, to use the tool properly.

If a meeting room was created using a nickname, there shouldn’t be a concern about someone rejoining the room from last week’s class. The Meet quality tool (and to a lesser extent the Meet audit log) contains a plethora of data about who has been using meet, both in meetings within and without the organization. Attendance tracking is something that has been announced and is coming to domains with Google Workspace for Education Plus subscriptions that have applied licenses to their teachers.  And so long as the users are signed into Google and the meeting was created within a managed domain, users should be able to join any non-expired meeting room.

The big unanswered question is “what is coming next?”

Google and the Meet team have been working frantically to address concerns around privacy and digital while trying to keep backward compatibility for business users where Meet has been “working as expected.” Feedback from schools has been overwhelmingly directed in the need for more visibility and control. There are some exciting features coming to all Education levels around teacher level control of a Meeting room, and it is the hope of everyone here at Amplified IT as well as the schools which we work with that these additional controls fill in the gaps which have been missing while using Google Meet in the remote Classroom. If you are looking for answers, we suggest joining the North American Google Technical Collaborative as this is where it really shines. Members rely on us to filter important and up to date Google Workspace information and members continue to collaborate and lean on each other as we all work on rolling out new features and capabilities to our respective districts.