In November, it was communicated that Google was no longer going to support Google Cloud Print. Amplified IT’s partner management team did an initial post on this news trying to get ahead of the fear which typically comes along with this type of uncertainty. After having some time to process what the next steps are for schools which are using Google Cloud Print, whether admins are aware of its usage or not, we’ve come up with some items to help start the coming transition off on the right foot.

We’ve often touted GAM as one of Amplified IT’s Support team’s goto tools. For the uninitiated GAM, short for Google apps manager, is a command line tool which can be used to access several of Google’s APIs. The tool is open sourced, available for download from github, with a number of forks available. The main repository is also primarily owned by one of Google’s employees, Jay Lee, who keeps in close communication with the owners of the other main repositories.

With GAM, we can get a list of all cloud printers owned by users on our domain. We can also see or update the properties for these printers including who they are shared with, whether they are online. The standard documentation for these commands can be found here.  Some examples of the information you can get using GAM is:

The print share command will only show where a printer was shared in the https://google.com/cloudprint interface, and not where the printer was configured within the Admin console. Unfortunately, there is no API for this type of printer assignment. Also, you can limit the users you’re wanting to display printers for by adding a query parameter to the first “gam print users” command. Changing the “12m” in the second command will adjust how far back to retrieve print jobs.

The additional limitation is that the second and third commands can only be performed when the printer’s owner is managed by your organization. Filtering the initial “output_printers.csv” will allow you to see printers owned outside of your organization which your users have access to, which is also helpful information.

Within the Admin console, we can disable a managed user’s ability to setup their own printers.  Where these printers will be disappearing unexpectedly when Cloud Print goes away, and helps us to keep tabs on which printers need to be migrated to a new solution (either using a third party for additional management, or using the Native printing settings for general availability as mentioned in the previous article). 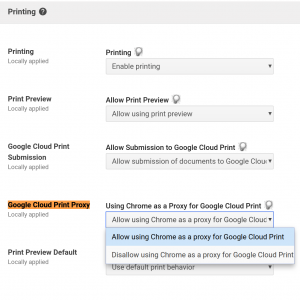 This has been a long standing recommendation in our Google for Education audit to disable this for student organizational units. With the current move away from Google Cloud Print, consider disabling it for all users which are not owners of managed printers.

There is also the question as to whether Chromebooks should be able to discover printers which broadcast their existence on the network. This discovery may be using bonjour, mdns, snmp, or dns-sd. Within the Admin console, we can configure our user’s managed profile to not acknowledge these announcements, leaving them only access to the printers which are administratively available. However, with this disabled users will not be able to discover a printer at home, so that is a consideration when making decisions about this setting. 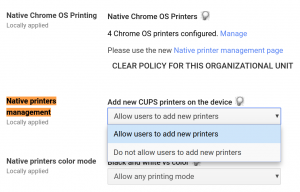 Although Google Cloud Print is going away, they have given administrators a year to determine what actions they need to take. As a first couple of steps is going to be identifying how the changes are going to affect users. Using GAM can get us information such as lists of printers which have been setup (both managed and unmanaged), print jobs submissions to see how frequent Cloud Print is being utilized and which printers to focus on transitioning, and lists of which group of users have access to which printers. Along with the settings in the Admin console, we can start making preparations for the day when Cloud Print is no longer available.

If you would like more information about what print management solutions Amplified IT has a relationship with, you can contact info@amplifiedit.com.